HOW TO STOP PUSHING WITH RIGHT HAND 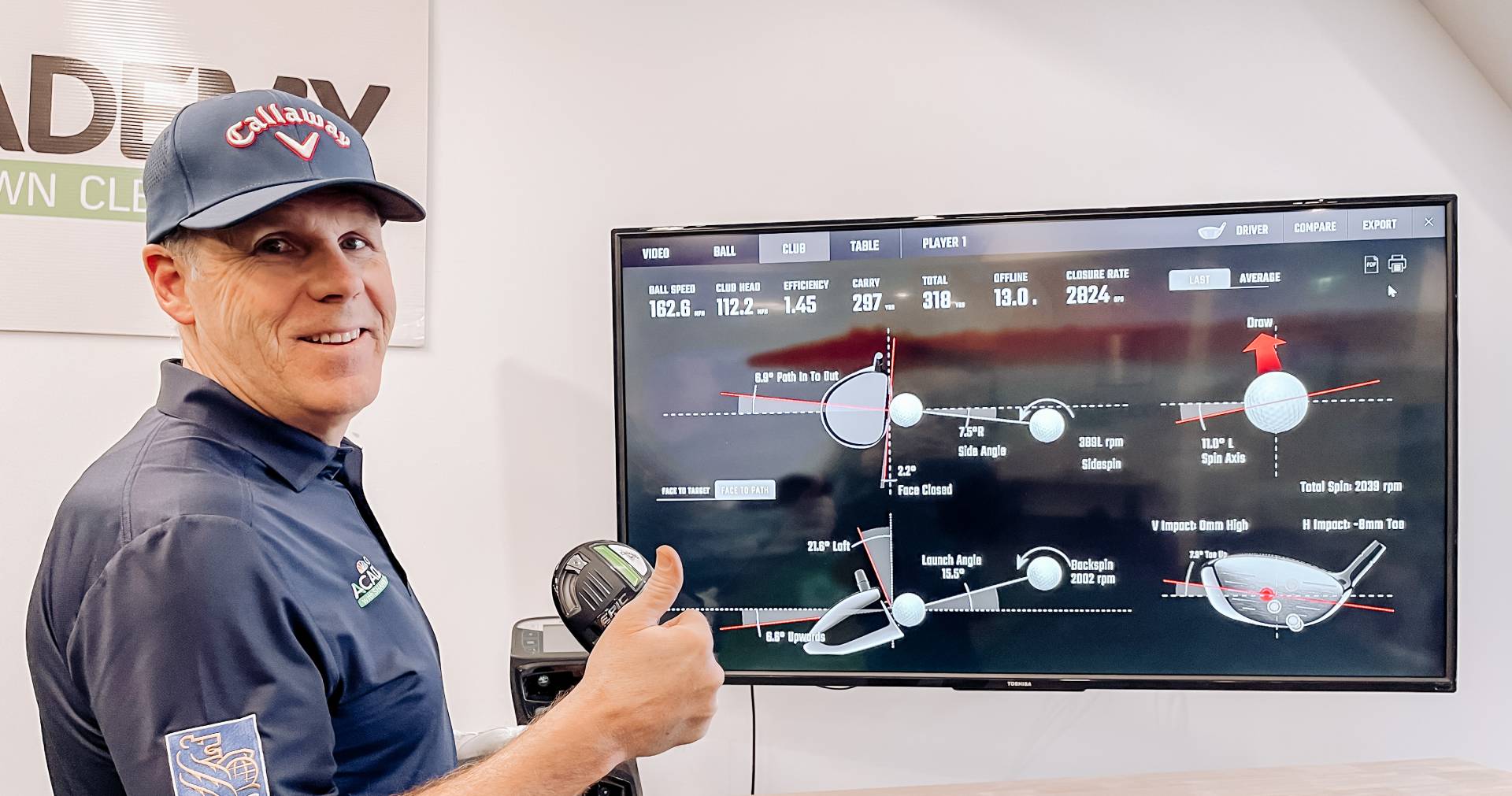 Hi from the Wisdom in Golf Team!

You are a PAR member

You are not a member

Oh no! are you serious? Don't tell me that you are not subscribed and that you are going to miss out on this amazing video that will show you how to drive the ball long and straight!? Please click here to subscribe

What is Wisdom in Golf

Shawn Clement, one of the top 20 youtube teachers and the only one recognized for teaching without body part or positions, drives the ball over 300 yards both right-handed and left-handed and breaks par from either side, and is also the only one who ever qualified and played world-ranked events with 1/2 left and 1/2 right-handed clubs in the same bag! He is the ultimate expert on golf instruction!

He and his team will show you how to play to your full potential with our Online Golf Lessons Academy...

Check Out our Subscription plans for the complete Golf Video Series with Shawn.

Thank you Shawn for the video on pushing with the trail hand. I have the tendency to push with my dominant (Right) hand . I am sure that is the reason, I haven’t ever been able to feel the release. Can’t wait to get on the range and course to try the correct way.

It’s nice to have some epiphanies like that! You can already feel and anticipate how things are going to transpire; I look forward with you! 😀👍

Like your female student mentioned above, I have a lot of trouble casting which is manifest by my right shoulder getting out in front. Thanks to your guidance I am slowly improving after swinging incorrectly for 30 years(!). In order to neutralize my right side, I modified my 4lb hammer so I throw it with my left hand while lightly hold onto the attached rope with my right hand. It has helped significantly. When I play , I reproduce that light feeling in my right hand. Any critiques of this modification?
IMG_2152.HEIC,
Hopefully, you can see the image above

Not bad! I kinda like this strategy! It works well with transferring the focus from the arms to the legs! Please keep me posted as to your progress! Shawn

Just hanging for the follow up video to this.
Love your work.totally changed how I feel about playing golf

Ahh, the old towel trick! I do remember doing one on youtube and you can check that out in the meantime…https://www.youtube.com/watch?v=7MeXP_pGQfI

Shawn…thank you as these Premium Teaching videos are great. I watched this one with great interest. I’m a lefty, 66 years old and a 10 HC. I have always used a baseball grip and it feels very uncomfortable to overlap. Some of my friends always tell me that I need to change. Your teaching has me for the most part striking the ball well with the ability to hit a draw or fade when I want. What is your opinion on making the change to overlap?

10 finger grip is an awesome grip!! If you feel that you are delivering a nice release through the ball and into your picture, then why would you change?

Awesome that is a great encouragement. I was hoping you would tell me that! Thanks Shawn!

How do you reconcile taking the right hand out with throw the football or utilizing the infielder sidearm throw?

Great question!
This video is for the person who is still trying to hit the ball and gets out in front and always feels the need to hit AT THE BALL. Those who are able to deliver a nice throw AT THE TARGET, you are all set! This video does also have a terrific addendum to then”pumping up the swing” video in he sense that you cannot strain the throw either. All in all, a very cool addition to the feel of kinetic chain engagement with very little possibility of arm overuse which so many golfers have grooved before they got here with us.
When you get good with this action though, you then need the support of the trail hand index finder as one of the last important links of the kinetic chain.

So are you referring to the ‘knife the grip’ concept here when you mention index finger? I guess the follow up question is how do you discern a nice throw at the target vs. at the ball? I tend to pull the ball left a lot and I’m thinking this right hand aggressive action might have something to do with that. I’ll have to try out the grip and see if this helps.

I only stop by to say something, because I have just recently connected some dots that have really helped me diagnose where to apply emphasis when certain results happen.

I also had a hard time discerning a proper throw at target vs. throw at ball sensation, like it sounds like your saying. In addition, I also tended to pull my shots left. I feel that the two are actually somewhat separated, although ultimately connected.

First, how to establish throw to target. For me literally swinging a sledge hammer really helped me get the feel. this was before this wonderful video with the double overlap. Once I got the sledge hammer feel, I would try to take it to the range with a golf club and couldn’t replicate the sledge hammer feel. What I found was to pay attention to the intensity of grip in my left (lead) hand during chip shots. For me, having a strong grip (in this case relating to intensity not position) during a delicate swing, proved to be very challenging. I tended to want to either girp hard swing hard, or swing light grip light. Focusing on a ‘toned’ grip as Shawn has put it, really helped. The key here though was to really focus on only the lead hand grip strength. When I watched Shawn talk about toned grip, I always applied it to both hands. focusing on the one hand, really helped me feel the “swing” of the lead arm. It’s almost as if your left arm (lead arm) is the sledge hammer, and you’re using your legs/body to swing it, while your right hand or trail hand “propels” it. Marrying this feel to where I want the ball to land resulted in a much easier and more tangible feel of “tossing at the target”. It wasn’t ambiguous, it was VERY easily identifiable. So much so, that if you question it, it likely isn’t right yet.

This leads me to what to do with the pulled shots. What I found, was once I could easily identify a correct “swing to target”, which at this point took the chip shot formula above and put it into a full swing by going “chip”, “pitch”, “gentle full”, “regular shot”, I realized, that i simply had my ball position too forward. This was resulting in pulled shots. adjusting my ball position just a little back (maybe half a ball to a ball) resulted in perfect draws.

My main thrust here is that once you get the feel down, which for me simply came from focusing on “gripping the lead hand tightly” with gentle effort in the actual swing, the rest of the game begins to fall into place quickly.

Also, as a bonus and this is probably mind numbingly simple, but face angle on a golf club means the sole of the club not the top. For years I would close the club based on the top-line, only to realize I was closing 50 or 60 degrees when it looked like 30. Realizing this has revolutionized everything. SO SIMPLE.

Anyway, good luck and keep going, i spent basically 3 years working through WIG concepts before they fully began locking in and boy shawn is right, it’s so great when they do!

Kevin – Thank you…..I am going to try this out. I too have tossed clubs and hammers at the park but had difficulty taking it to the practice range so this really sounds like something I need to train and test at the range. Appreciate the thoughtful assistance.

Wanted to find out if you will be conducting any schools near Atlanta, Ga. anytime in 2020?

Hey Shawn, Have you ever did a follow up video on Matt Wolff? Intriguing young fella

I have a regular video coming on youtube soon with a cool twist to it; I actually have his swing imitated nicely! 😀👍

Shawn I have been using this grip for my putter for a long time now. Would going to this grip as a “specialty” shot, say chipping or to take spin off pitch shots be advantageous? And does the ball position need to change a little bit?

Easy to implement on specialty shots; and it always starts with a flight plan!! You will simply need to close the face a bit more for low shots and let the weight flow in the direction of the shot. Enjoy!

Hi Shawn, I defintely love this double overlap thing. I will try it on the range asap. Besides that I am always amazed to see your precise up and down leg motion and absolutely believe it helps boosting the swing but don’t you think that this precise leg move is maybe too challenging for us mortals?

If you have 2 arms and 2 legs and you are insurable, then you are good to go! You are officially superhuman compared to “be careful” and “watch out” and “hold on”!!!
See “pumping up the swing” video as a nice back up and have fun with the drills!
Shawn